JACKSONVILLE, Fla. -- "The Mustache" is suddenly "The Man" in Jacksonville.

Nick Foles was scheduled for surgery on Monday to repair his broken left clavicle, and while the Jacksonville Jaguars will undoubtedly be adding a quarterback this week, they are going to be counting on rookie sixth-round pick Gardner Minshew to be the starter for the bulk of the season.

It's not exactly the ideal scenario for a front office facing pressure from the owner to get the franchise back to the level it was in 2017, but it's the reality facing head coach Doug Marrone -- who surprisingly seemed somewhat upbeat after Sunday's 40-26 loss to Kansas City.

Who is Gardner Minshew? 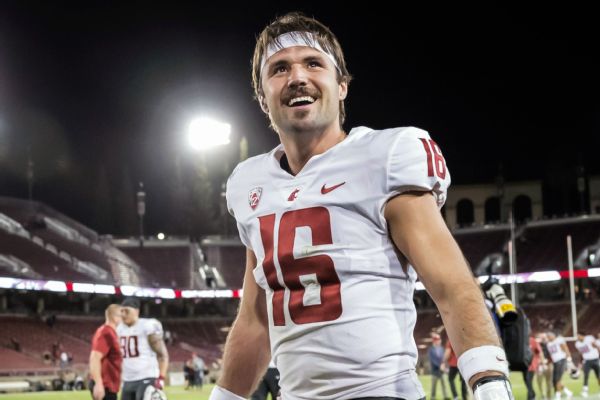 The Jaguars quarterback -- now thrust into a starting role with the injury to Nick Foles -- became a cult hero at Washington State last season, where he had a prolific senior season.
• How Gardner Minshew and his mustache took over Washington State
• Jaguars confident in rookie Minshew behind Foles

"I feel better about him [Minshew] now, today, after Week 1, than I did probably during the preseason," Marrone said. "I think that's fair to say. I think the work during the preseason was able to get him ready for things like this. I don't know -- I'm hoping that's the case.

There are some legitimate reasons for Marrone to feel good about the 178th overall pick. Minshew completed his first 13 passes -- the most by a rookie quarterback to begin his career over the last 40 years, per Elias -- en route to 275 yards and two touchdowns. Minshew completed 22 of 25 passes, with one of the incompletions a pass that bounced off Leonard Fournette's hands and was intercepted.

Minshew led the Jaguars to field goals on his first two drives and threw touchdown passes to Dede Westbrook and Chris Conley, though the latter came with 1 minute, 55 seconds remaining and the Jaguars trailing by 21 points.

More importantly, the situation didn't overwhelm Minshew, whom Jaguars fans immediately adopted as a favorite the moment he was drafted because of his fun-loving persona and 1970s-style mustache.

"He's fearless, and that's one thing I like about him the most," said receiver DJ Chark, who caught four passes for 146 yards and a touchdown. "He'll step into a situation [and] he won't blink.

"I know I came up to him on the sideline once I found out the news and I told him it's just like preseason. We was out there a few times in preseason. We worked together in the offseason. So nothing new. He can get out there and throw the ball with the best of them and it's time to show it."

Minshew has pretty much had to prove he can do that at every level at which he has played. He had no scholarship offers coming out of high school and enrolled at Northwest Mississippi Community College and led the Rangers to the NJCAA national title.

• Does Rivers make sense for the Bucs?
• Playoffs are Falcons owner's standard
• Cards know they must run more in 2020
• Vikings eye 'collaborative effort' on D
• What could happen with Lions' free agents

He transferred to East Carolina, where he split time as the starter in 2017. After earning his bachelor's degree, he committed to Alabama as a graduate transfer but was enticed by Mike Leach to come to Washington State instead. Minshew enrolled in summer, won the starting job and went on to lead the nation in passing with 367.6 yards per game. He won the 2018 Johnny Unitas Golden Arm Award and finished fifth in the Heisman Trophy voting.

Minshew doesn't have the prototypical NFL size (he's listed at 6-foot-1) and arm strength, which is partly why he slipped into the sixth round. The Jaguars fell in love with him during his NFL combine interview because of his high football IQ -- specifically his ability to learn multiple offenses, as he did during his college career.

It certainly looked like he knew what he was doing against the Chiefs.

"I had a lot of confidence going in there," Minshew said. "[Center] Brandon Linder made sure that I was comfortable. Made me feel like they trusted me and I trusted them. That's where you start really building big things.

"... Not happy with the circumstances that happened, obviously. It breaks my heart to see what happened to Nick, because he's been one of the best people I've ever played with [and] had the pleasure to be around. To see him go down like that, it was awful. But I know he's going to be there with me and we're going to have this team where we need to go."

The Jaguars don't have a timetable for Foles' return, but Aaron Rodgers had a similar injury in 2017 and missed eight games. If the Jaguars place Foles on injured reserve and designate him to return, he would be able to practice after six weeks but would not be able to return to the active roster until two weeks after that. That would be the Jaguars' bye week, so he wouldn't play in a game until Week 10 at Indianapolis on Nov. 17.

The Jaguars made a move on Monday, trading a fifth-round pick in the 2020 draft to the Steelers for Josh Dobbs, who backed up Ben Roethlisberger in Pittsburgh. But Minshew should get his shot to continue as the starter as long as he runs the offense as well as he did against Kansas City. And he said he's not looking over his shoulder.

"That doesn't matter," Minshew said. "My plan is to prove that I'm the best I can be for this team every day at practice, every snap I get in a game. That's my job. My job's not to figure out if we need to sign a new quarterback or whatever. My job is to go out there and do the best I can for our team."