It's Heisman Trophy weekend for four finalists: LSU quarterback Joe Burrow, Oklahoma quarterback Jalen Hurts and Ohio State quarterback Justin Fields and defensive end Chase Young. With all four seemingly destined for NFL futures likely beginning in 2020 (or 2021 with Fields), it is a good time to examine their pro futures.

The Miami Dolphins might be the most important team in the 2020 NFL draft with three first-round picks and 14 projected picks. All eyes are on the Dolphins' pursuit of a franchise quarterback, something they haven't had since Dan Marino retired in 2000. Miami has other needs such as edge rusher and offensive tackle, too. 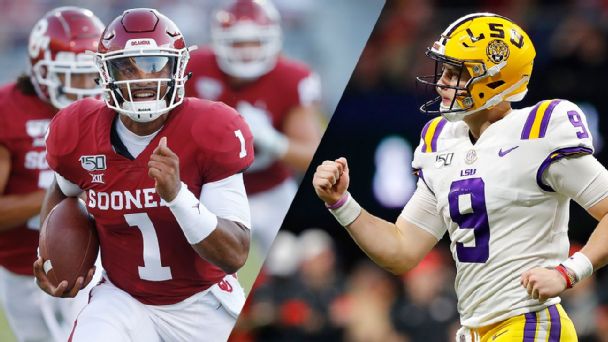 ESPN's Football Power Index projects the Dolphins (3-10) to secure the No. 4 pick in April. Two games back of the Cincinnati Bengals (1-12), the Dolphins have a 5.7% chance of landing the top pick. So what actions should Miami take if it doesn't control the top of the draft board?

"The Dolphins should feel really good with the job that [coach] Brian Flores has done, but they can ruin that by reaching for a player," ESPN college football and NFL analyst Dan Orlovsky said. "Everybody wants to find the quarterback, but if you land the No. 4 pick, you may miss on Joe Burrow. It will be really hard for them to find their guy if they don't get the top pick.

"Everybody thought this would be a great QB class, but with the Tua [Tagovailoa] injury, that's a massive question mark. Justin Herbert has had some performances that will raise some questions. If they fall in love with Burrow, they may need to maneuver. If they adore Herbert at No. 3, then great. But you don't want to erase all the good by getting a guy you aren't sold on. So, maybe you go Chase Young or another player and wait until 2021."

Here's each Heisman candidate's early pro scouting report, a comparable NFL player and how the Dolphins could land each one. The Heisman Trophy ceremony will be on at 8 p.m. ET Saturday on ESPN.

Orlovsky's scouting report: "There's a watery elusiveness to his game. The stuff that is hard to measure is the big moments where it could have gone either way, and he's succeeded instead of failing every time. That's what teams are going to fall in love with -- and his personality. The physical talent -- he's not a massive arm guy, but who cares? He's made big throws against SEC defenses; that translates. The accuracy is there, pretty good anticipation, ball placement to covered receivers is cool. He's going to be the No. 1 pick. He has assumed leadership of his team and Baton Rouge folks fell in love with him."

Wolfe on the Dolphins' fit and how Miami could land him: To get Burrow, it likely would mean Miami trading up to the No. 1 pick. Burrow is a special talent. It would cost a pretty penny of draft capital, but if the Dolphins love him, they should not hesitate. His moxie, playmaking ability and unique swag have some current Dolphins players salivating over potentially playing with him.

Orlovsky's scouting report: "He's a long, freak, physical athlete who has bendability, violent hands and can get off the football. The brains match the physical talent. He's a game-wrecker. He's a scheme-changer. He's a guy you will game plan for week after week. You'll leave him one-on-one and let him dominate, or double-team him and open someone else up. It'll be a tough decision at the top of the board because many teams really need a quarterback, but some teams may feel this kid is the best player available."

Wolfe on the Dolphins' fit and how Miami could land him: Young might be the draft's best overall player, as he is ranked on Mel Kiper Jr.'s Big Board. The Dolphins are last in the NFL with 17 sacks, and they desperately need a game-changing edge rusher. Young would fit like a glove. Quarterbacks often rise up draft boards, so there's a chance Miami could stay put and take Young if they land the No. 2 or No. 3 pick. Otherwise, another trade up might be the only route.

Orlovsky's scouting report: "The intangibles and leadership ability is off the charts. The sacrifice, the team stuff -- every NFL team is looking for that. Hurts is going to be limited as a NFL thrower. We're seeing that at Oklahoma right now. They've become a run-based football team. Hurts has made progress throwing the football, but enough progress to be a starting quarterback in the NFL? That's still a question. It's not as simple as making him like [Baltimore Ravens QB] Lamar Jackson. Lamar avoids hits a lot better than Jalen. [Carolina Panthers QB] Cam Newton was a lot better thrower. I don't know how many NFL systems he can be successful in."

Wolfe on the Dolphins' fit and how Miami could land him: Hurts perfectly fits Flores and general manager Chris Grier's desire for players who have overcome adversity with team-first mentalities. It's unclear what they think of his developing ability to be an NFL starting quarterback. This could be a Day 2 pick with the idea of drafting another QB in 2021 or supplementing the pick with a veteran free agent (Cam Newton?) or risky 2020 pick (Tagovailoa?).

Orlovsky's scouting report: "His future is incredibly bright. He's got 40 touchdowns to one interception this year. He's only going to get better with understanding and tightening up of his long throwing motion. He's a very strong thrower. He wants to stay in the pocket. He deserves a lot of credit for looking this good after 12-13 games. If he continues this growth, he's going to skyrocket in the draft when he declares."

Wolfe on the Dolphins' fit and how Miami could land him: Fields' talent is tantalizing, and his size and skill set are sure to make scouts drool. He isn't eligible until 2021, so this would mean the Dolphins punt on a first-round 2020 quarterback, building the rest of their team and wait for the 2021 draft class, which will feature Fields and Clemson's Trevor Lawrence.