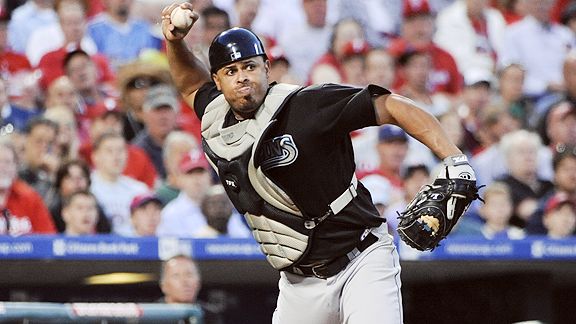 Catcher Ronny Paulino, formerly of the Florida Marlins, is close to being the newest Met, according to ESPN's Jorge Arangure.

Ronny Paulino, who was non-tendered by the Florida Marlins, should join the Mets as Josh Thole's backup or platoon partner, according to ESPN's Jorge Arangure.

Paulino, 29, will have to sit out the first eight games of 2011 -- the remainder of a 50-game suspension for testing positive for performing-enhancing drugs. He proved a workhorse last season with Florida, playing virtually every day with John Baker hurt last season. The righty-hitting Paulino wilted before the season-ending suspension as a result of the overuse. He hit .170 with one homer in his final 32 games after taking a .305 average into a July 3 game at Atlanta.

• Made second consecutive Opening Day roster with Pittsburgh in 2008...missed majority of the season due to a right ankle sprain, appearing in only 40 major league games...optioned to Triple-A Indianapolis on June 6 after Ryan Doumit was reinstated from the DL....placed on seven-day Disabled List on June 22 (retro to June 18) with a right ankle sprain...reinstated from DL on August 8.