With 117 Division I-A programs and more than 100 players vying for roster spots on a good many of those teams, it's sometimes difficult to predict the players who will separate themselves from the pack. But that's just part of the fun of college football.

Every team has its established stars. The following are players who jumped out on film as potential standouts. Some are just young players who needed time to develop, while others were simply overshadowed a season ago by bigger-name stars. 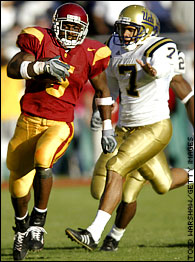 Bush, who averaged 5.8 yards on 90 carries as a true freshman last season, has the potential to be one of the premier running backs in the nation. While losing Hershel Dennis certainly wasn't a positive, it could clear the way for Bush to emerge as a star player. LenDale White is bigger and stronger than Bush, but Bush has good power for his size and his home run speed makes him a threat to take it to the house every time he touches the ball. If Bush proves capable of handling the load and can limit his mistakes as a blocker, he could earn the confidence of his coaches. Bush is also a threat in the return game, as he ranked 10th nationally with an average of 27.3 yards per kickoff return last season and could also handle punt return duties this season.

Justin Holland, QB, Colorado State
I've only gotten glimpses of Holland in his limited work as Bradlee Van Pelt's backup the past two seasons, but there's a lot to like. He was one of the school's highest-rated recruits ever and has the size, arm strength, athletic ability and toughness to shine as a first-year starter this fall. Having a receiver like David Anderson, who set school records with 72 catches for 1,293 yards last season, doesn't hurt. 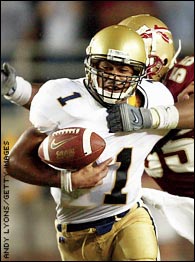 Reggie Ball, QB, Georgia Tech
Undersized and somewhat erratic as a passer, Ball was not what Chan Gailey envisioned as the quarterback in his pro-style offense. But Ball is the best scrambling quarterback in the ACC and is one of the best athletes at the position in the country. If Ball continues to improve his accuracy and ability to read defenses, he will become one of the most dangerous dual threats at the quarterback position in 2004.