As difficult a process as ranking my preseason top 100 was, selecting Callahan Bright as the nation's top player was just as easy. There aren't enough adjectives to describe the 6-foot-2, 310-pound prep version of Warren Sapp, but here's a start: big, tough, aggressive, mean, instinctive, fast, quick, mobile, agile, dedicated, relentless and inspired. 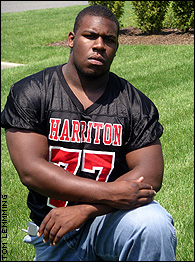 In fact, the Rosemont (Harriton), Pa. prospect is the most dominating high school defensive lineman that I've seen in five years. Even though the quality of competition in the Philadelphia area is pretty good, no one has had success trying to control Mr. Bright. He usually faces double or triple teams, but sometimes four players are assigned to stop this locomotive.

Bright's film shows an exceptional run-stopper with quickness. He also just explodes out of his stance, plays the game with great leverage and is impossible stop once he gets a full head of steam. Unbelievably agile and nibble-footed, Bright shows very good pass rushing moves, but he also has the brute strength to be an effective bull-rusher.