One of the toughest parts of our job as writers is narrowing days, weeks, sometimes months of reporting into what is often only a few hundred words. That was the case with my most recent story on snowboarder Kevin Pearce. I interviewed more than 20 folks during my research period, watched Pearce compete in the halfpipe several times and spent a few days with him and his family in Vermont at the end of October. What made it into The Magazine is a snippet of Pearce's story. Here's a hodgepodge of interesting stuff that didn't make the cut …

As part of my research I talked to some of snowboarding's most notable icons. They all had great things to say about Kevin—and that's not an automatic reaction for these guys.

TERJE HAAKONSEN: "Kevin is so calm, but has the ability to up the ante when the contest is on. I've seen him have a hard time in practice, but when the competition starts, he turns it on and wins. He is very strong mentally. He is really mature and professional and a guy who is going to be there for a lot of years. He is also such a humble, nice kid. My girlfriend always says she hopes our son grows up to be just like Kevin."

JAKE BURTON: "Kevin is a great guy, super popular and genuine. He is not going to put on any airs. He is a solid person who is fun to be around and his friends would do anything for him. Kevin is on a good track and is progressing in the sport. To put it in golf terms, he's not a guy who lays up. He will go for it and do what he has to do to win an event. That is key. He has the run, and if he executes perfectly, he is going to win. No one knows that better than him."

But perhaps the most telling quote about Kevin came from his father, Simon.

SIMON PEARCE: "Most people bring their children up thinking they have to teach them everything. My parents brought us up assuming we knew everything and if you gave us the space, we would figure it out. We raised our boys the same way. When parents bring their children into the store [Kevin's dad is the owner of Simon Pearce, a high-end glass-and-pottery company], the first thing they say to them is, 'Don't touch anything.' The message they're giving the child is that the child isn't capable of touching anything without breaking it. I tell them, 'Touch anything. If you break it, I will buy it.' When you grow up feeling nothing can stop you, you just keep going."

Kevin is a blast to be around (we chronicled this in our Action Sports Blog). Here are some experiences I reported while hanging around him … 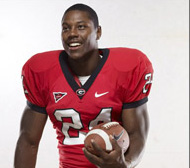 KEVIN TURNS 21 … I visited the Pearces a few days before Halloween, which was also a few days before Kevin's 21st birthday. While I was there, he and his brother Adam were working on their costumes, which eventually turned into something resembling 1980s skiing troll dolls. Since Kevin was flying to Reno the morning after Halloween to celebrate his birthday with friends at a Neil Young concert, his family birthday dinner took place while I was visiting. I don't know that I've met as tight-knit a family as the Pearces, or one as openly affectionate and just plain sweet. Spending time around them, it is easy to see why Kevin is such a down-to-earth, level-headed, all-around good kid. Strangely enough, I had celebrated Georgia running back Knowshon Moreno's 21st in Athens, GA, while reporting a story for ESPN The Mag's college football preview issue just a few months earlier. In contrast, Moreno's birthday was at a pizza restaurant and quickly turned into a very public affair. He couldn't get a moment of time to himself and he wasn't even a professional athlete yet. Another example of how different the athlete experiences in these respective sports are.

SNOW SUPPORT … At last year's U.S. Open, Kevin had more support than Oprah's control tops. His best friend Danny Davis was healing from his second broken ankle in a year, but turned out to cheer on Kevin and the rest of the FRENDS posse at the bottom of the halfpipe. Since the U.S. Open is Pearce's home contest, his entire family (his parents and three brothers) was also in attendance. This was the first time I met his brother David, who has Down syndrome. David is an inspiring guy. This didn't make it into the story, but, for the record, he has more medals than Kevin from the several events (including skiing) he competes in at the Special Olympics.

FRENDS … You might have seen Kevin or someone in his posse wearing a T-shirt or sticker that says, "FRENDS." His crew—Luke and Jack Mitriani, Danny Davis, Scotty Lago, Mason Aguirre, and Keir Dillon—made up the term from an inside joke, because there is no "I" in "FRENDS." Watch for it at Winter X. Anytime you see Pearce, FRENDS are likely to be nearby.

LEARNING TO BLOW GLASS … On my final day in Vermont, Kevin and his mom, Pia, took me on a tour of the Simon Pearce glass factory and I got a lesson in blowing glass. I will never look at stemware the same way again. Mr. Pearce told me it takes five years to learn the glass-blowing trade, eight years to get good and 10 before you are good enough to work for him. I planned on wowing Mr. Pearce by being an instant glass-blowing prodigy. I fully underestimated it. Here, in five easy steps, is what the Pearces taught me:

STEP ONE: Liquid gas is heated to volcanic temperature and then twirled on the end of a metal stick while simultaneously holding a wooden spoon-like object and dipping it in water. The goal is to create a perfectly round ball of liquid glass. As with all steps of the process, this was a lot harder than it looked.

STEP THREE: Learn lesson—:Stick is made of metal. If you do not place stick gently onto your lips, you will cut your lip and begin to bleed. Clean off blood, prepare to try again.)

STEP FOUR: As you blow and twist, you are supposed to create a beautiful, hourglass-shaped, bubbly, glass-like object. Mine was tossed back into the furnace under the guise of being "below standard." The goal is some kind of symmetry. Beauty is clearly in the eye of the beholder.

STEP FIVE: Scribble note to Self reminding Self not to quit day job. Unless of course Mr. Pearce wants to take me under his wing for a decade.

Seriously, glass blowing takes an amazing amount of patience, it's not hard to see how that patience transferred over to his parenting of the Pearce brothers Kevin, Adam, Andrew and David.